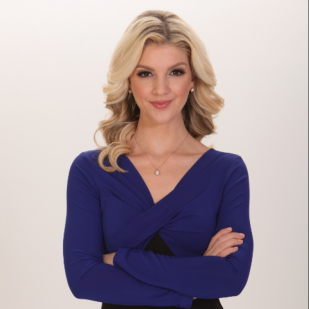 Ali Bradley comes to Central Pennsylvania from Toledo, Ohio where she was a news anchor and reporter.

Ali didn’t exactly follow the conventional path when it comes to getting into the business. She worked as an assistant at Fox Sports Northwest after graduating with her Bachelor’s Degree from Washington State University… Go Cougs! She then moved to Los Angeles and worked on the HBO hits, True Blood and Big Love. After three years of LA life, Ali pursued her true calling.

She got her start as a news anchor at K2TV in Casper, Wyoming. There, she worked as an anchor, reporter, producer, assistant news director, and at one point– she was the news director. Once she learned all she could in Casper, she moved to Toledo.
Now, Ali is continuing to expand her career as the lead evening anchor alongside Evan Forrester. She says she feels very blessed to be in such a wonderful, welcoming area.

Ali is on the board of a non-profit organization which helps get disabled animals into wheelchairs, or other rehabilitative equipment. She is very passionate about her dogs, Bob (a rescue, Cocker Spaniel) and Phyllis (a Cavalier King Charles Spaniel). Ali has been active within every Humane Society she has been in contact with. Ali is also a champion for mental health awareness, and has worked alongside NAMI and the Stop Suicide Coalition.

Ali is a die-hard Seahawks fan, a true 12th man and she roots for them no matter where she lives.

During her free time, Ali is either relaxing with her pups, doing yoga, or cooking.

If you have a story idea you would like to share, please shoot me an e-mail: ABradley@fox43.com

You can find me on facebook as well: Ali Bradley TV