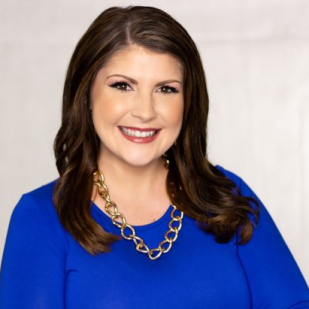 It wasn’t until her senior year of High School at Upper Darby that Lynda had her first taste of the television business. She wasn’t sure TV was for her but after the first time she said the words “Good afternoon, I’m Lynda Weed. Thank you for watching UD Update” she was hooked.

Lynda immediately changed her college applications from elementary education to electronic media and spent the next 4 years learning all about the news industry at Kutztown University. While at KU she was the President of the National Broadcasting Society and News Director of her schools nightly newscast called NewsBreak.

She joined the FOX43 Morning News team in April of 2018. You may recognize Lynda from her time spent at other stations in the market including CBS21 in Harrisburg as a reporter/producer, Blue Ridge News 11 in Ephrata as the evening anchor, WGAL News 8 as fill-in traffic reporter and newscast director and WITF as a reporter for RadioPA.

Lynda is originally from Upper Darby but spent 2 years living in New Jersey reporting for NBC40 in Atlantic City where she covered multiple stories including the before and after of Hurricane Sandy and the return of the Miss America Pageant to the Garden State.

When she’s not covering the latest news for the FOX43 morning show Lynda spends as much time as possible with her husband Tom and her 2 young boys Brady and Logan at their Perry County home. She also loves traveling to Philadelphia (GO EAGLES) to visit her Mom, Dad and 2 sisters.

If you have a story that involves tacos, ice cream, a new brewery and macaroons send it her way! Connect with Lynda on Twitter, Facebook and Instagram.