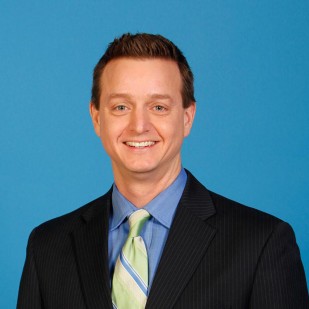 Ok, I admit it, I have one of the best jobs you can have, Sportscaster. No, I don’t have to pay my bosses to do this, they actually pay me to talk about Sports! How did I get this position? I’m sure luck was a factor but so was my work in previous stops: Baltimore, Reston, VA, Allentown, PA and Knoxville, TN before landing here at FOX43 in February of 2000.

I’m not sure why but my incredible wife has taken the journey with me and even blessed us with two amazing kids that, despite my resistance, will not stop growing.

Maybe it tells you enough about me to know that I was voted “Unsung Hero” by my senior classmates and “Athlete of the Year” by my high school coaches at Westminster High School in Carroll County, Maryland. I prefer to highlight the athletic achievements of others and coach my kids sports teams. For the sake of professional credibility, I will offer up some bits of personal information and a few memorable moments from my past.

Favorite Sport to Watch on TV: Football (not even close, could sit on couch all day for NFL Sundays)

Best Game Played: Went 5 for 6 with HR, 4 Doubles and 11 RBI’s at the plate, pitched a 1-hit shutout with 17 strikeouts in the same Little League game. (Is it sad I may have reached my athletic peak at 12?)

Best Game Witnessed: I have the ticket stub .. was in the crowd September 6, 1995 at Camden Yards the night Cal Ripken, Jr. broke Lou Gehrig’s consecutive games played streak with 2,131.

First Heartbreak: Baltimore Orioles blow a 3-1 lead in the 1979 World Series and lose to the Pittsburgh Pirates and Willie “Pops” Stargell. To this day, I refuse to listen to Sister Sledge’s “We Are Family.”

Favorite All-Time Athlete: Wayne Gretzky (used skills and smarts to be the best)

That’s all I can think of right now so enough about me, let’s keep the focus on you. Keep in touch and share your great sports stories with me. You can email me at tsadowski@fox43.com , become a facebook fan or follow me on Twitter @ToddFOX43.